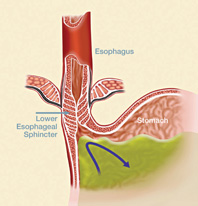 The esophagus is a muscular passage which carries food from the mouth to the stomach. The lower esophageal sphincter (LES) is a circular band of muscles at the lower end of the esophagus that acts a barrier between esophagus and the stomach.

Gastro-esophageal reflux disease (GERD) is a chronic disease that occurs when the lower esophageal sphincter closes incompletely allowing the stomach contents to leak back or reflux into the esophagus. It can cause heartburn, a burning sensation felt in the chest or throat when the refluxed stomach acid touches the lining of the esophagus.

Laparoscopic Nissen Fundoplication and the LINX procedure is a minimally invasive form of anti-reflux surgery performed to restore the function of lower esophageal sphincter. 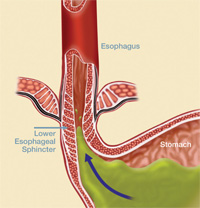 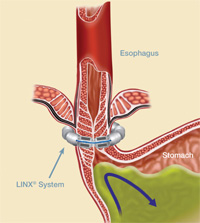 Patients diagnosed with gastroesophageal reflux disease (GERD) will experience symptoms such as heartburn or difficulty swallowing. Once diagnosed with GERD, patients will need to manage the disease for a lifetime and may notice an increase in the severity of their symptoms. The LINX® System is used to treat GERD.

The LINX® System is a small, flexible ring of magnetic, titanium beads placed around the existing weak esophageal sphincter. The beads pull together to inhibit reflux by helping to close the esophageal sphincter and restore the body’s natural reflux barrier. For eating/swallowing, belching or vomiting, the beads are forced to expand and separate to allow passage.

The LINX® System is placed just above the stomach around the esophagus using laparoscopy, which is a minimally invasive technique commonly used in various procedures. During the procedure, patients are placed under general anesthesia and the surgeon uses a measuring device that precisely determines the appropriate size of the LINX® System. The system is then placed around the esophageal sphincter and is essentially tied together to create a ring using suture tails. The entire procedure typically takes less than an hour and patients are discharged either the same or next day and can resume a normal diet.

To learn more about the LINX procedure call our office , we are happy to answer any questions and discuss other long term options available to treat GERD.

Nissen Fundoplication can be performed surgically with a laparoscopic technique under general anesthesia.

Laparoscope is a small fiber-optic viewing instrument made up of a tiny lens, light source and a video camera. The camera attached to the laparoscope displays the image of the abdomen on a monitor, allowing the surgeon to view the internal structures.

The surgeon makes small incisions in the abdomen. In one incision, the laparoscope is introduced to view the abdomen. Along with the laparoscope, sterile solution is injected which expands the abdominal cavity, giving the surgeon a clear space to operate. Other portal is used for the insertion of surgical instruments to repair the leak of gastric acid. The surgeon then wraps the stomach around the esophagus to prevent the back up of acid from the stomach into the esophagus. At the end of the procedure, incisions are closed with sutures.

The benefits of laparoscopy are smaller incisions, faster healing, a more rapid recovery, shorter rehabilitation period, and less scarring. It is often performed on an outpatient basis and the patient is able to return home on the same day.

It is much less traumatic to the muscles, ligaments and tissues than the traditional method of surgically opening the abdomen with long incisions (open techniques).

Following the surgery, your surgeon may recommend you follow certain measures for a successful outcome:

Complications include stomach bloating, dysphagia (difficulty swallowing), loosening of the wrap, and recurrence of the symptoms.

Talk to your doctor if you have concerns regarding anti-reflux surgery.

You will need the Adobe Reader to view and print these documents.