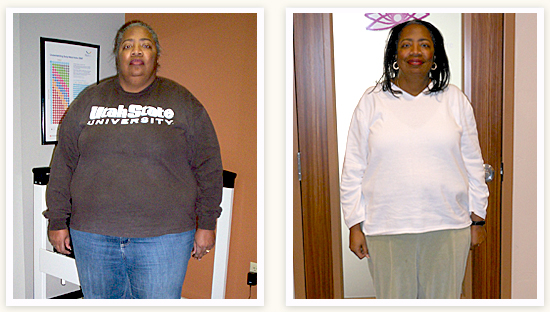 I was not always obese. I was thin until I became pregnant with my son at age 25. I gained over 75 lbs. during my pregnancy, and was never able to get the weight off after I gave birth. I tried starving myself, Weight Watchers, Phen-Fen, South Beach Diet, Atkins, etc. All of these resulted in some weight loss, but after a few months the weight would start to creep back on. I continued to gain more and more weight and at my peak I weighed 338 lbs.

My family encouraged and supported me with my weight loss efforts, but I was never able to make it last. I began having health issues: pre-diabetes and high blood pressure. I also started falling because my knees would give out from my excess weight. I was having back problems and at that point, my doctor recommended that I have lap-band surgery. I have been extremely successful losing weight after the surgery. Since my surgery in February 2011, I have lost 130 lbs.