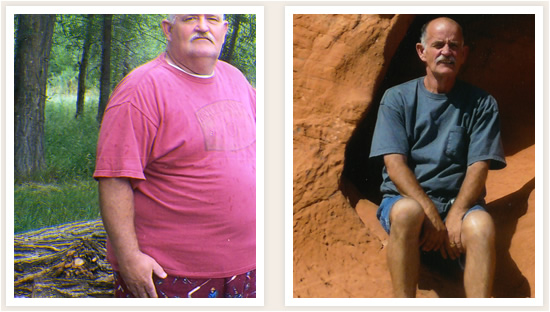 My name is Ricky. I am 52 years old. My height is 5’5″. And my starting weight was 294 lbs. My BMI was 48, I was having medical issues with acid reflux, sleep apnea and wearing a CPAP machine at night, getting out of breath easily, and edema in left leg.

I had gone to a gastroenterology Dr. for the acid reflux and he sent me to have the sleep apnea test which in turn I had to use the CPAP at night (what a nuisance). That Dr. Was the one that said I should look into having a gastric bypass, I was already thinking about having it done for about two years by then, done some research about it, and I also have a sister that had one about six years earlier and had done very well. So when he suggested it I was on board with it, it was just a matter of finding a doctor and to see if my insurance would cover it.

So first I called my insurance to see if it would be covered and they told me it would if my BMI was that high. Then is started calling the Dr.’s that was on my plan to see which one I could go to, and I found out that I had to go to a Center of Excellence. And that was the Surgical Weight loss Center of Utah. I called them and I had to go to an orientation meeting to get things started. Then set up my first Dr.’s appointment. He ordered labs and they came back and said I was pre diabetic and vitamin D deficient.

So I made the decision to go ahead with the surgery on my own because I didn’t want to blame anyone else if it didn’t work out.

My Surgery was September 15, 2008. I reached my goal weight at eight months out of surgery, and maintained my weight for two months, and then summer came and I was more active so I lost a little bit more weight, a total of 155 lbs.

I am feeling much better than before, three weeks after surgery I quit using my CPAP machine, I am no longer pre diabetic, I no longer have to take my acid reflux medicine, and am no longer vitamin D deficient. It is nice to be rid of all of that And all of that extra weight. I am now half the weight I was.

People that I use to work with years ago do not even recognize me. I saw a guy that I worked with for about 14 years and said Hi to him, he looked at me and asked if I was talking to him, I said yes, he said do I know you, so I had to tell him who I was, he was so shocked he couldn’t believe it was me because he only knew me as fat.

I have lost a total of 155 lbs. And I feel so much better not carrying around all that extra weight. It was like carrying two people around all the time.